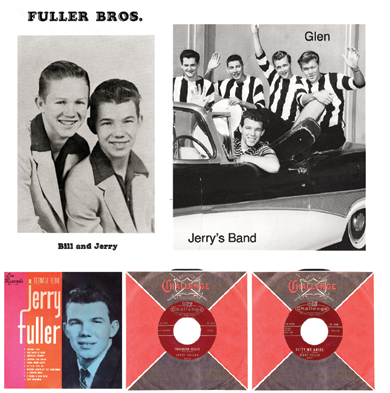 Jerry was born on November 19, 1938 in Fort Worth, Texas. His father, Clarence, a carpenter by trade, sang like Bing Crosby, and mother, Lola - like Patti Page. While Clarence worked, Lola taught her four children how to sing. When Jerry was 11, he and his older brother Bill became "The Fuller Bros", and Mom had them singing a cappella at school and church functions, talent contests...everything from minstrel shows to jamborees. Jerry's early influences (other than family) were his car radio push buttons, pre-set to a hodge-podge of Pop, R&B, Rockabilly and Country stations. After high school in 1957, Jerry recorded his first composition, I Found A New Love for Lin records and by 1958, finished his first album, Teenage Love. He moved to Los Angeles in early 1959. 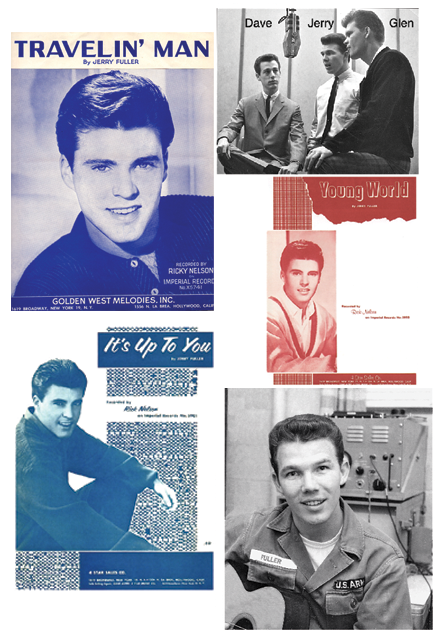 Jerry worked as a demo singer for various Hollywood publishers and writers. Using these demos to audition his vocal talents, he landed a recording / songwriting contract with Gene Autry's Four Star Music and Challenge Records. Jerry's first release for the label was Betty My Angel, followed by Tennessee Waltz. Both were National chart hits. Other chart records were The Place Where I Cry, Guilty Of Loving You, I Get Carried Away and Shy Away. In 1960, while touring with the Champs (Tequila), Jerry discovered Glen Campbell performing in an Albuquerque nightclub. Blown away by Glen's voice and guitar playing, Jerry convinced him to move to LA and hooked him up with Jerry's own show biz contacts. Glen's natural talents took it from there, and in no time, he became a fellow member of LA's "Wrecking Crew" of studio musicians and singers. Glen helped Jerry demo his new song, Travelin' Man - written for Sam Cooke. As luck would have it, the demo wound up in Ricky Nelson's hands..Ricky's Travelin' Man became a multi-gold #1 hit...his biggest ever! Rick recorded 19 of Jerry's songs, including major hits; Young World, It's Up To You, A Wonder Like You and Congratulations. Jerry, Glen, and Dave Burgess of the Champs sang back-up on most of these recordings. During Jerry's 8 years at Four Star Music, he wrote over 400 songs, including The Blossoms' Son In Law, The Cascades' For Your Sweet Love, Jerry Wallace's You're Driving You Out Of My Mind, and many more cuts by other top artists of the day.

Jerry was drafted into Uncle Sam's Army just when his new songs were becoming "in demand". He spent the next 2 years stationed in up-state New York at Seneca Army Depot, writing songs when duty allowed, and entertaining the troops. Upon leaving the service, Jerry accepted a job offer by Four Star to head up their New York office, so he took up residence in Manhattan. To Jerry, it was like starting over, considering his entire network of friends and contemporaries were a continent away. On one of many "get-aways" from the city, Jerry played a one-niter at a nightclub in Albany, N.Y. He was so impressed with the house band, "The Knickerbockers", He made a demo tape of the group and mailed it to Challenge Records back in LA. Jerry got the OK to sign them to a contract, and when he moved back to the coast in 1965, he brought The Knickerbockers with him.

On Jerry's first day back in L.A, his buddy, Glen Campbell took him to meet his friend, Annette Smerigan...who later that same year became Jerry's bride. Glen was his best man.

Jerry booked the Knickerbockers into Hollywood's Red Velvet nightclub, where, in no time, anyone who was anyone flocked to see them. Challenge gave Jerry the go-ahead to produce them and his first record production ever, was The Knickerbockers' classic hit, Lies, plus the album of the same title. Jerry produced a few more chart records on the group before leaving Challenge and Four Star. In1967, Jerry signed with Columbia Records as a staff producer, where his first job was to find new hit talent. He discovered Gary Puckett and The Union Gap playing a bowling alley lounge in San Diego. His first production with the group was their first million-seller, Woman, Woman. Jerry both wrote and produced Puckett's next three multi-million sellers, Young Girl, Lady Willpower, and Over You, each one outselling the latter. The Union Gap outsold The Beatles for the year. In this same year-1968, Fuller also produced O.C. Smith's multi-million selling Little Green Apples, and O.C.'s #1 R&B single, Son Of Hickory Holler's Tramp plus the #1 album, Hickory Holler Revisited. Jerry recieved the first and only Bill Gavin Producer of the Year award - 1968, plus 2 Grammy nominations. Jerry continued with O.C. Smith for an additional 15 chart hit singles and albums. In 1969, Jerry produced Andy Williams' major hit, Happy Heart, and the gold album of the same title. Andy's next album, Get Together also went gold. Jerry's song, Live And Learn by Andy was top 10 A/C. Next up for Fuller was Mark Lindsay, who had just left The Raiders to go solo. Jerry produced Mark's million-selling Arizona, and follow-up hits, Miss America, Silver Bird, and Jimmy Webb's First Hymn From Grand Terrace. In 1970, Jerry signed Mac Davis to Columbia and produced Mac's classic Songpainter album, containing Mac's first hit single Whoever Finds This, I Love You. During these production years, Fuller Continued to write, and his songs are sprinkled among his many artists' albums and singles, including Billy Joe Royal, Pat Upton, John Davidson, Jimmy Walker and Jerry, himself, whose self-penned I Know We Can Make It made the top 40, A/C. Shortly before leaving Columbia, he had the privilege of producing his all-time favorite love song singer, Johnny Mathis. The first single release was Jimmy Webb's Evie, which made the A/C charts.

In late 1971, Fuller left Columbia Records to form his own Moonchild Productions Inc., and Fullness Music Company. Johnny stayed with Jerry independently. Jerry produced 5 major hit albums with Johnny and a half-dozen singles made the charts, including Make It Easy On Yourself, Take Good Care Of Her, Soul And Inspiration / Just Once In My Life, and Show And Tell -- which Jerry Wrote specifically for Mathis. (On many Mathis cuts, Jerry sings the high harmony above Johnny's lead vocals). During this time, Jerry produced a top 10 country hit, Loving Her Was Easier by Roger Miller. In 1973, Jerry signed on with Bell Records' sub-label, Rocky Road records to produce soul singer, Al Wilson. Not to give up on a good song, Jerry tried his Show And Tell with Al, and the record zoomed up the charts to #1 in three different genres simultaneously. It sold 3 million copies, and was Cashbox's Single of the Year for 1973. Jerry also wrote the follow up hit, Touch And Go, and produced one more hit medley with Wilson...Paul Williams' and Roger Nichols' I Won't Last A Day Without You / Let Me Be The One. Peabo Bryson's Show And Tell also was #1 R&B in 1989.

In the mid 70s, Jerry summoned his Texas roots and began writing songs for the country market. Ray Price recorded many Jerry Fuller songs, including his top country hits, That's All She Wrote, To Make A Long Story Short, and Feet. Other country chart hits include Reba McEntire's I Still Long To Hold You Now And Then and That Makes Two Of Us...Reba's duet with Jacky Ward, Freddie Hart's Toe To Toe, Connie Cato's I Won't Take It Lyin' Down, Jacky Ward's Travelin' Man, Dobie Gray's That's One To Grow On, and John Anderson's Eye Of A Hurricane. In 1982, Jerry finally got the chance to produce his old friend, Glen Campbell. Jerry produced Glen's Old Home Town album, featuring the hit single, I Love How You Love Me and Jerry's song, A Woman's Touch,- a hit for Tom Jones later that same year. In 1984, John Conlee got up to #4 with Jerry's song, Way Back. In 1990, Jerry discovered yet another potential star in a Nevada lounge. On a tip from Reno talent guru, Bob Dee, Jerry flew up and checked out Bubba Wray...aka Collin Raye. Jerry's friend, Bob Montgomery at Epic records, Nashville signed Collin to Epic and Jerry recruited John Hobbs to co-produce Collin's album. The first single, All I Can Be made top 20, the second, Love, Me went all the way to #1 and stayed there for weeks. The third single, Every Second also made #1, and the album, All I Can Be went Double Platinum and climbed to #7...marking the first time a new Epic artist had ever achieved this kind of initial success.

Jerry and Annette Fuller reside in Sherman Oaks, California, in the same house (for 49 years). Their children, Adam Lee and Anna Nicole live close-by in the San Fernando Valley. 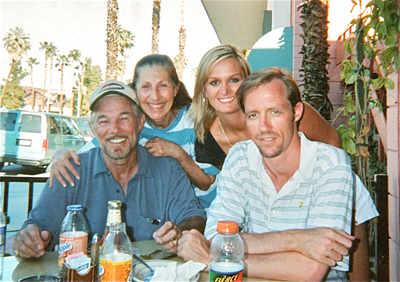